Cisco Reyes
Mo is a character that has appeared in ever Dance Central game thus far. He is a member of Hi-Def.

Mo first appears in Dance Central as a playable character with two looks: B-Boy and Flash. B-Boy is available from the start while Flash is available once the player earns 25 stars with him. In the game, he is the dancer used for the Warm Up Challenge.

In the proposed story, Mo is seen promoting a club all over the area. Once done, he rides on his skateboard and arrives at a phone booth. He picks it up, hears a representation for the club on the other line, and hangs up from it afterwards. The platform underneath him then sinks down and takes him to the club where most of the other characters are at, partying away.

Mo appears in Dance Central 2 as part of Hi-Def. He has three looks: Crew Look, Street Style, and DC Classic. Out of the three, Crew Look is the only one given at the start. Street Style is unlocked once the player earns 36 stars within Hi-Def's songs in the Crew Challenge mode on any difficulty and DC Classic is unlocked when the player imports the Dance Central songs into Dance Central 2, however since importing has been disabled, it is no longer possible to retrieve the DC Classic look if importing has not occurred.

In the Crew Challenge mode, Mo calms Glitch down from thinking that the player is spying their style for The Glitterati and assures him that they just want to hang out and rep for them. Once impressed, Mo protects their style from being matched by The Glitterati by keeping it away from them and gives the player their crew card.

In the Story mode, Mo gets sent back to the 1980s to learn moves from the era that can be used to stop Dr. Tan from furthering on with "Operation Lockstep", a plan to end the dancing world as they know it. During that time he was at Toprock Ave.. When the player arrives, Mo thinks that they are there to battle him and Glitch, who is also there, and both subsequently start to battle. When Rasa, via Boomy, informs them otherwise, they stop, and Glitch states in disappointment that if they leave then the area will get reconstructed. In response, Mo says that priorities are first, but also mentions the reason he gave being an excuse to not go back in the time portal and vomit, which he previously did. They then both start to get in gear in taking Dr. Tan down; once they arrive back with the learned dance craze, Glitch feels sick, presumably from vomiting again, but Mo dismisses Glitch's sickness and tells him to practice some headspins. He later gets sent back to prehistoric times through the works of Dr. Tan, but gets sent back to the present again by DCI as the player traps Dr. Tan into the time warp and is seen lounging with Taye afterwards.

Mo appears in Dance Central Spotlight as a playable character. He is one of fourteen characters available to play as within the game.

Mo is a guy that is easygoing and likes to show off from time to time. He knows the ins and outs of the world within Dance Central, and uses that to start parties going. He has a liking to pranking, and also likes to joke around when speaking, but he still retains a level-headed mind and does not get big-headed for his own good.

He has 2 outfits, B-Boy & Flash. (Flash is an unlockable and can be unlocked by getting 25 stars with Mo in DC1) His B-Boy outfit is an blue striped hoodie,green pants,purple socks and grey shoes. His Flash look is a blue hat, a blue shirt with a purple V on the top of the shirt, a necklace that is the shape of a red cassette tape, grey pants and grey shoes with pink laces on one and green laces on the other. Flash is Mo’s only costume without a hoodie or jacket. In the first Dance Central, Mo does not show his eyes at all.

In Dance Central 2, Mo has a new look: TV Neon color bar shirt, jeans, and a sweatshirt with the hood hung on his hat.

Street Style: Hat with blue plaid jacket with orange pants, and he also has pink socks.

DCI Agent: Mo wears a pink shirt, purple tie, grey and black striped sweatshirt with the sleeves rolled up to reveal that the underside is pink, jeans, and blue shoes.

Mo in his Crew Look 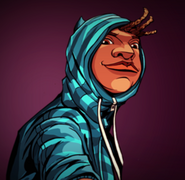