Hello you've reached Miss Aubrey. If you're calling to apply for
the open position as my friend please leave detailed information
about yourself and why you think you're good enough to hang
out with me. Ciao! -Miss Aubrey's voicemail in DC

Marieve Herington
Miss Aubrey is a character that has appeared in every Dance Central game thus far. She is a member of Lu$h Crew.

Miss Aubrey first appears in Dance Central as a playable character with two looks: School Daze and Princess. School Daze is available from the start while Princess is available once the player earns 25 stars with her. In the game, she is the dancer used for the Simple Challenge.

In the proposed story, Miss Aubrey is chatting with Emilia inside Angel's car, with Dare dancing outside the roof. She eventually decides to hang up the phone conversation with Emilia and kick Dare's behind, confusing Emilia and slightly annoying Dare. She is later sitting next to MacCoy, much to his pleasure, while Dare glares at them, plus Taye who is also in the car. She is lastly seen at the club Mo was promoting with most of the other characters partying away.

Miss Aubrey appears in Dance Central 2 as part of Lu$h Crew and comes with three looks: Crew Look, Street Style, and DC Classic, with Street Style being unlocked by earning 36 stars within Lu$h Crew's songs in the Crew Challenge mode on any difficulty and DC Classic being unlocked by putting in the code "Left, Left, X, X, Down, Right" with an Xbox 360 controller at the "Enter Cheats" section of the game.

In the Crew Challenge mode, Miss Aubrey corrects Angel on thinking that the player approached them to party and says that this is the dancer everyone is fawning over. Once the player conquers Lu$h Crew's challenges, Miss Aubrey formally invites them to rep for their crew, diminishing Angel's flirts along the way.

In the Story mode, Miss Aubrey was taken to the 1970s to learn moves from that era that can be used against Operation Lockstep, Dr. Tan's plan to take over the dancing world, for Dance Central Intelligence's mission. During that time she was at the Roller Rink and greatly despised every minute of it. When the player arrives, she begs for them to bring her back to the present, and once she arrives, she thanks the player while asking anyone to get her to a stylist as fast as possible. She later gets sent back to prehistoric times through the works of Dr. Tan, but gets sent back to the present again by DCI as the player traps Dr. Tan into the time warp and is seen mad when she sees Angel talking to Emilia. Later on she confronts him, with Glitch eavesdropping from behind.

Miss Aubrey is set to appear as a playable character in Dance Central (VR).

Miss Aubrey is a very confident girl that believes her talent to be an art form to admire. Despite this, her confidence comes off as snooty and arrogant, causing her to be in a rivalry with Emilia who occasionally pulls pranks on her, much to her despise. She does not associate with anyone who is not up to her standards, and easily dismisses them as such. Angel has a romantic interest in her, but she does not show the same, and brushes him off every time he tries to flirt. However she was seen to be angry when Emilia and Angel were talking among one another in a credit image for Dance Central 3, but whether or not it stems from her hatred towards Emilia or indicates a possible interest in Angel is unknown. 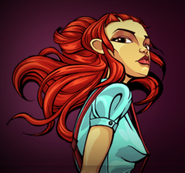