Hart is a character in the Dance Central series.

Not much is known about Hart, but she is known to be guarded when approached. After some time however, she removes her guard and is shown to have kindness inside her. 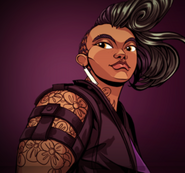 Hart's official promotional image for DCVR
Add a photo to this gallery
Retrieved from "https://dancecentralkinectgame.fandom.com/wiki/Hart?oldid=28529"
Community content is available under CC-BY-SA unless otherwise noted.