Stephanie Sheh
Emilia is a character that has appeared in every Dance Central game thus far. She is a member of Riptide Crew.

Emilia first appears in Dance Central as a playable character with two looks: Sweatin' and Knockout. Sweatin' is available from the start while Knockout is available once the player earns 25 stars with her. In the game, she is the dancer used for the Tough Challenge.

In the proposed story, Emilia is on the phone with Miss Aubrey at the gym. As they are conversating, Miss Aubrey abruptly disconnects the phone call, confusing Emilia. She then punches a punching bag, knocking it with so much force that it discombobulates from the gym and breaks through a window. She is lastly seen at the club Mo was promoting with most of the other characters partying away.

Emilia appears in Dance Central 2 as part of Riptide Crew and comes with three looks: Crew Look, Street Style, and DC Classic, with Street Style being unlocked by earning 36 stars within Riptide Crew's songs in the Crew Challenge mode on any difficulty and DC Classic being unlocked by putting in the code "Left, Left, Up, Right, Right, X, Down, Y" with an Xbox 360 controller at the "Enter Cheats" section of the game.

In the Crew Challenge mode, Emilia declines the player from advancing forward to represent their crew as auditions for it were last week, but after some convincing by Bodie, Emilia offers the player a chance. Once impressed, she allows them to rep.

In the Story mode, Emilia was taken to the 2000s to learn moves from that era that can be used against Operation Lockstep, Dr. Tan's plan to take over the dancing world, for Dance Central Intelligence's mission. While there she co-hosted "Dance Central Live", a music television show, with Bodie. When the player arrives in the 2000s, Emilia, once finishing a show, advises the player that their show is not done filming for the season, and ignores the player's request to come back, but Lima, via Boomy, demands them otherwise. Later on, Emilia tells Bodie, who thinks that another show is happening, that the cameras are off, puzzling him. Rasa, via Boomy, then alerts the two that Dr. Tan's army has invaded Dance Central Intelligence, but gets cut off before he can finish. Noticing this, they quickly return back. Once back, the agency appears silent, but she soon gets taken away, presumably by Dr. Tan's army, and is sent back to prehistoric times. Luckily, it is revealed later on by Rasa and Lima that Emilia, along with everyone else, was sent back to the present as the player was fighting Dr. Tan. When she returns, she is talking to Angel, much to Miss Aubrey's anger who is watching from the sidelines.

Emilia appears in Dance Central Spotlight as a playable character. She is one of fourteen characters available to play as within the game.

Emilia is set to appear in Dance Central (VR) as a playable character.

Emilia is a sporty girl with a winning attitude. She is very driven in what she does, and expresses it in a bold, loud manner. She has some compassion, but it is usually not seen from jump where it is overshadowed by her winning attitude of pride and tenacity. She has a rivalry with Miss Aubrey, who feels is snooty with a know-it-all attitude, and plays pranks on her on occasion.

Her Knockout outfit consists of a yellow and brown off-shoulder crop top with a logo on it (The logo consists of a star with gibberish text attached to it), a white bra, green hotpants, and yellow wrestling boots. Her accessory consists of yellow glasses.

Her Street Style look consists of a white tank top, ripped jeans, and black boots. Her accessories consist of a red handkerchief hanging out of the jeans, a gold necklace, wristbands in brown and yellow, and a white headband.

Her Retro Fitted look consists of a ripped red tank top, jeans, and black boots. Her accessories consist of a black bracelet with mini diamonds on it, white necklaces, and a dangling white earring.

Her DCI Agent look consists of a black dress with a black leather jacket over it, black tights, and strapped purple flats. Her accessories consist of a silver necklace with three purple jewels attached to it and bracelets in silver and black.

Her Spotlight look consists of a black midriff tank top with four stars on it, a pink bra, gray hotpants accented with a swirly design of pink, white, and black, black socks, and pink and blue sneakers. Her accessories consist of a green bandage wrapped around her hand and two differently designed kneepads: one in yellow and one in blue and black. 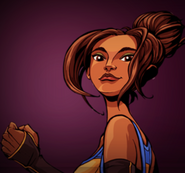 Emilia talking to Miss Aubrey on the phone

Emilia reconsiders her priorities with Bodie

Emilia acts fast when she hears that Dance Central Intelligence is under attack by Dr. Tan's camp

Emilia getting taken by unknown figures

Emilia talking to Angel with a disturbed Miss Aubrey watching from the sidelines
Community content is available under CC-BY-SA unless otherwise noted.
Advertisement